Getting to Know China’s Great Forbidden City in Brief

The iconic Palace that now has became one of the most popular tourist destinations in China boasted over 15 millions visitors annually. A number that seemed to only rise; as in 2016 and 2017, the number of visitors amounted to 16 millions. A lot of people toured to China with a visit to the Forbidden City as the main itinerary, or even its sole purpose. This sparks little wonder, as the impressive palace complex is evidently the largest surviving palace complex in the world, and it houses the last of emperors and empire reigns in China. 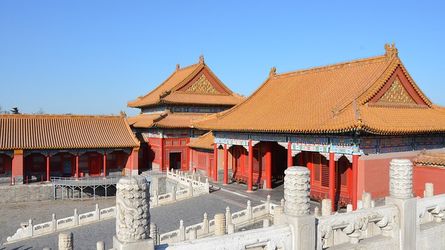 The Chinese characters is read as “Zijin Cheng”, which literally means “Purple Forbidden City”. It’s home to 24 emperors before China became a Republic as we know now. Every inch of the palace complex is a testament to culture and ancient heritage. The Forbidden City is undoubtedly the largest palace complex in the world, comprised of approximately 74 hectares and rectangular in shape. The Forbidden Palace was the center of China’s political and governmental scene for half a thousand years.

Today, the Forbidden City is known simply as the “Palace Museum” in English. The locals refer to the Forbidden City as “Gugong”, which translates to “Former Palace”. The palace complex is located North of the Tiananmen Square, and a ticket needs to be bought in advance or on the spot before entering the establishment. The Forbidden City is listed by UNESCO as the largest collection in the world that preserved ancient wooden structures.

The Palace got its name “Forbidden” because of the simple fact that no one could enter, nor leave the palace without the emperor’s permission. This includes even the imperial families, with the exception of the Emperor himself.

The Forbidden Palace was home to the Ming Dynasty and Qing Dynasty; the two last ruling Chinese Dynasties. The palace was built during the reign of Emperor Chengzu of Ming Dynasty, in which construction began in the year of 1406. The construction of the Forbidden City took approximately 14 years to complete. It’s been said that over 1 million workers constructed the place. The Ming Dynasty ruled for 276 years from 1368 to 1644. Ming Dynasty is the last of Han Chinese to rule over China before it was taken over by the Qing Dynasty.

Qing Dynasty ruled for almost three centuries, where the Dynasty reached its golden era during Emperor Qianlong reign. Qing Dynasty was the last empire to rule China proper, from 1644 to 1912, before the establishment of the Republic of China. Qing Dynasty is also largely characterized by its many conquest, notably by Qianlong. The Qing Dynasty has largely shaped the territorial base of what is known as today’s modern China. The Qing Dynasty is also known to be multicultural, with Manchurians, a Chinese minority as the ruling clans, Mongolians, Tibetans, and Chinese Han, that comprises most of Chinese population. A lot of the Forbidden City’s treasures are from Qianlong era, when arts, poetry, and many kinds of literary works thrived and prospered.

How to Treat a Cold while Travelling

The Hip Youth’s Capital: What to do in Shibuya